Some time in the past few years (maybe as far back as 2015??), Az gave me a box full of his MiniDV master tapes for transferring.

They sat in my wardrobe for a while before I finally got around to purchasing a dedicated MiniDV playback deck. I'd been wanting one for a long time, and this was a good excuse to pull the trigger. Once it arrived (shipped from the US) I hooked it up and excitedly popped in one of Azza's DVs to capture. Unfortunately, the tape played back all glitchy and choppy.

Turned out that a lot of these tapes had been recorded in LP mode, making stable playback a lot tougher. I let Az know and asked if he still had his camera - it often helps to play back LP tapes on the device that recorded them. He did still have it. So the next time I saw him, I grabbed that off him and gave it a test. It worked a treat and I popped it aside until I had the time, and hard drive space, to complete the task.

So, here we are, half way through the year 2020 in the midst of a global pandemic, and I've finally got them all captured. Actually, I'd finished it in May but it took a bit of time to go through the footage and trim/join files as necessary.

There was also a lot of work identifying the shows themselves. From the earliest tape that had been recorded on Az's camera (The Meanies at The Tote 2008-04-13), the camera's internal time and date had been set incorrectly - it was 7 days early, and about 9 or so hours off. Some tapes were labelled well, so I didn't need to rely on the datestamp - others weren't. Using the DV timestamp and Az's old tradelist as a reference, most of them fell into place fairly easily.

Things got tricky when I got to (what turned out to be) the 2012 tapes, as the camera's internal battery must have reset, and with it the date. And none of these tapes were on Az's list. This also coincided with Az not labelling the tapes with as much detail as he'd done earlier. A tape labelled simply Link solo was datestamped 2008-01-01. Thankfully Old Skin 6/7/12 Gaso also had a 2008 datestamp (2008-03-21). Now, with a bit of head-scratching, I was able to go back to the other unknown tapes (7 different shows in total) and work out the dates. Combine that with visually identifying the venue, or listening for between song banter than would assist, and then it was off to Google for confirmation. Two 2013 Sun God Replica shows proved particularly difficult (the camera hadn't recorded a datestamp at all!), but after a bit of back and forth we pinpointed them.

Some of the LP tapes were still a little patchy, particularly at the start or end. Some I could play for a minute, rewind, play, rewind then play again and it would have sorted itself out. Others had persistant glitches at particular spots of tape that I simply couldn't overcome. But the vast majority of it managed to capture just fine.

I still have two tapes sitting on my desk, un-captured: one has digi-glitching that simply will NOT go away, no matter how far into the tape I let it run or how many times I try again. It's labelled Xenos Hamilton 09. I'll try it again some time. The other is labelled Slug Gun White Walls Cut Sick. I'm pretty sure Slug Gun is 2009-08-21 at the Farthwrop Centre, Portland and it may also have a Face On Fire set from this show. The other two sets are 2012-10-26 at the Gaso. The problem with this one is that the actual tape itself (inside the hard cassette shell) has snapped. Not uncommon, according to the internet, but I've never seen it before. I'll follow a YouTube tutorial and do my best to repair it.

Hit me up if you've got tapes (MiniDV, VHS, or otherwise) that need transferring!! 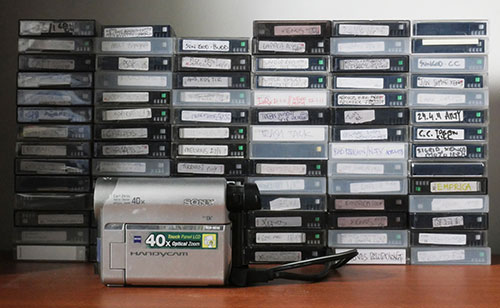 These recordings are all listed on the artist pages throughout my site.